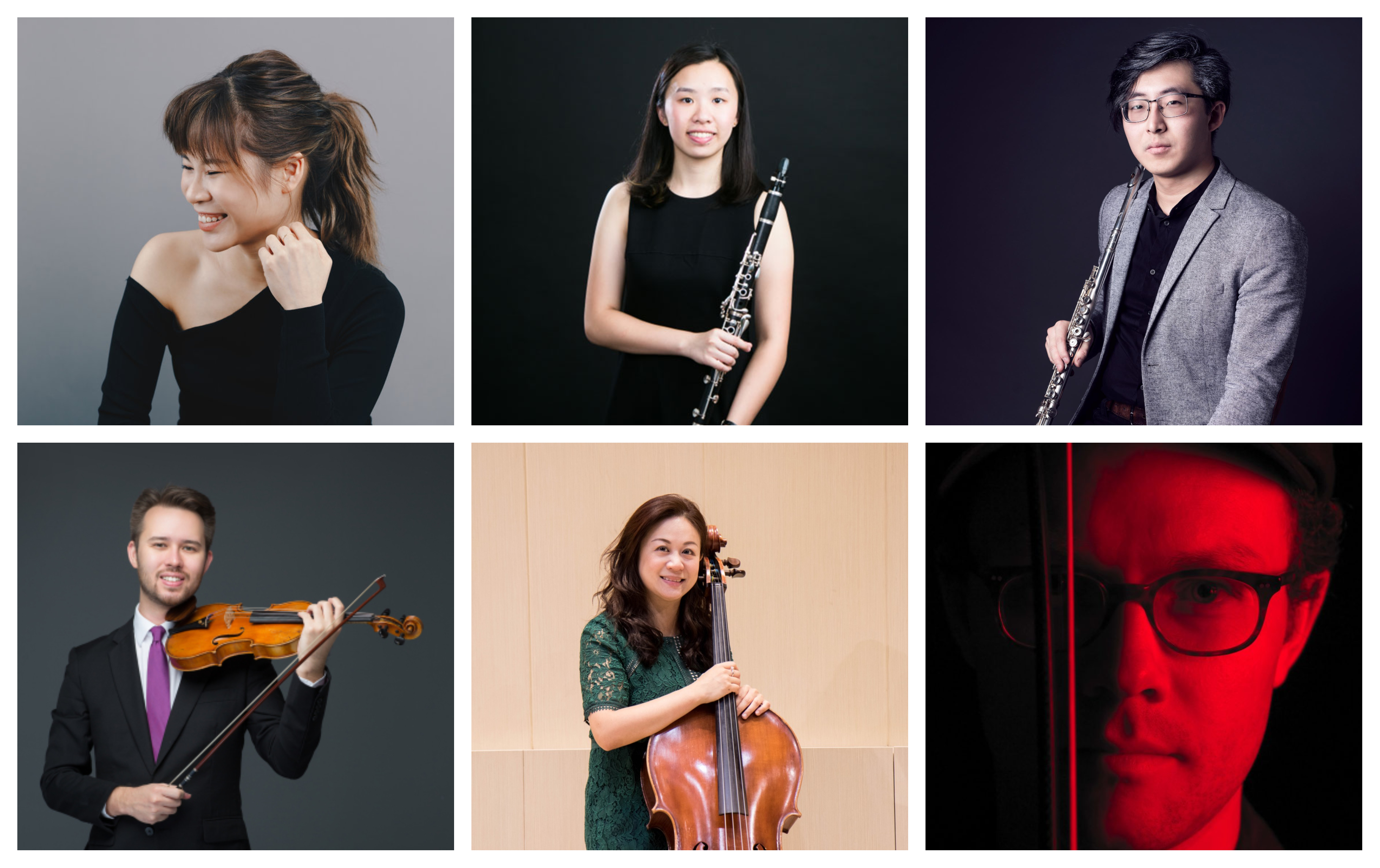 Some of Hong Kong's most noted chamber musicians get together for an evening of traditional repertoire, early music, and contemporary works highlighting Hong Kong composers. Featuring the music of Mozart, Bach, and Sibelius alongside works by HKUST composition faculty, the concert culminates in the premiere of a new work, commissioned from rising star Daniel Lo.

Angus Lee is recognized as one of Hong Kong’s most exciting flutists, known for his detailed approach in performing contemporary music, as well as his often provocative interpretations of canonic works. He is currently a member of the Hong Kong New Music Ensemble, and has been a freelance musician with the Hong Kong Sinfonietta since 2011. Lee also regularly appears with the NOVA Ensemble, of which he is a founding member.

As part of the HKNME, Lee has worked with, among others, composers Toshio Hosokawa, Brett Dean, Shi-rui Zhu, Hing-yan Chan, Unsuk Chin, and most recently Du Yun, presenting the Asian premiere of some of the most significant works in recent times, such as opera Matsukaze (Hosokawa), Ghost Love (Chan), Angel’s Bone (Du), as well as ensemble works Carlo (Dean), Double Concerto, and Gougalon (Chin).

Claudia Ng is a clarinettist originally from Hong Kong. She began her studies at the Hong Kong Academy for Performing Arts and participated in the RTHK Young Music Makers program in 2011.

Claudia has been an active participant of orchestral and chamber music festivals, including the National Symphony Orchestra Summer Music Institute and Sarasota Music Festival. She was also a finalist in the International Clarinet Association Young Artist Competition in Rome 2013 and in Florida 2017. During her time in New York City, she was the principal clarinettist of the New York Youth Symphony and received the Director’s Award for Commitment and Achievement. In New Haven, she is a teaching artist at the Music In Schools Initiative, which nourishes cultural leadership and provides a structured music-making environment for their students.

Yim made his solo debut with the Honolulu Symphony, and in recent years has performed concerti of Bach, Brahms, Bruch, Lalo, Mozart, and Vivaldi. He has performed chamber music with members of the Juilliard, Emerson, St. Lawrence, Pacifica, and Ying Quartets, and of the Chamber Music Society of Lincoln Center, principal players from the Shanghai Symphony and Hong Kong Philharmonic, and musicians from the Cleveland Orchestra and the New York Philharmonic.

Recent chamber music highlights include a performance in Carnegie Hall with members of the Emerson Quartet as part of the New Music for Strings Festival, a collaboration with world-renowned pipa virtuoso Wu Man in Lou Harrison’s Concerto for Pipa and String Orchestra led from the concertmaster chair, and a collaboration with Juilliard Quartet violinist Joel Smirnoff, involving the premieres of two newly commissioned works.

William Lane performs as a soloist, orchestral and chamber musician in Australia, Asia, Europe and North America. He studied under Jan Sedivka, Bruno Giuranna and Garth Knox, as well as in Germany at the International Ensemble Modern Academy, and in Switzerland at the Lucerne Festival Academy under Pierre Boulez. He was a prizewinner of Valentino Bucchi Competition in Rome in 2005.

Lane was Principal Viola of Ensemble Resonanz and a member of the Hong Kong Philharmonic; and has appeared as guest violist of Ensemble Modern and the Lucerne Festival Strings. Based in Hong Kong since 2008, he is Founder, Artistic Director and Violist of Hong Kong New Music Ensemble, Asia’s most active professional chamber ensemble dedicated to new music. In 2013 he was awarded the Award for Young Artist (Music) from the Hong Kong Arts Development Council.

Anna Kwan started learning the cello at the Hong Kong Academy for Performing Arts at the age of 10. She received her bachelor’s degree from the Oberlin Conservatory of Music and her Master of Music from Yale University. Anna has worked with members of the Vermeer, Emerson, Colorado, and Tokyo String Quartets. In 1992, she was chosen to be the only representative from Hong Kong to attend the Interlochen Arts Camp in Michigan, the USA with a full scholarship. She was principal cello of the Asian Youth Orchestra in 1995 and a member of the Jeunesses Musicales World Youth Orchestra, orchestra in residence of the Verbier Music Festival, Switzerland in 1996 and 1997. Anna also toured with the Yale Cellos, performing at the Manchester Cello Festival and Rencontre de Violoncelles in Beauvais, a CD of the concert was released for Calliope record label. Anna joined the Hong Kong Philharmonic Orchestra in 2001. In 2006 she was invited by Maestro Myung-Whun Chung to perform as a member of the Asia Philharmonic Orchestra to perform in Seoul, Korea.

Pianist Rachel Cheung is hailed as “a poet, but also a dramatist” displaying “the most sophisticated and compelling music-making” (The Dallas Morning News). She won over audiences and critics alike as a finalist at the 2017 Van Cliburn International Piano Competition with “stunningly imaginative” (Musical America) interpretations marked by “flights of both beauty and virtuosity” (Theater Jones) and was awarded the Audience Prize by online vote. A Young Steinway Artist, she continues to build a reputation for an elegant stage presence, giving sensitive and refined performances across three continents.

Born and raised in Hong Kong, Rachel graduated with first class honors at the Hong Kong Academy for Performing Arts under the tutelage of Eleanor Wong, and later studied with Peter Frankl at the Yale School of Music, where she was awarded the Elizabeth Parisot Prize for outstanding pianists. Additional competition honors include prizes at the Leeds, Chopin, Horowitz, Gina Bachauer, and Geneva International Piano Competitions. Her first concert DVD was released by VAIMUSIC in 2007, and her first CD, under the Alpha Omega Sound label of the Chopin Society of Hong Kong, was released in 2009. Her next recording project, a CD featuring the Chopin preludes, will be released by IMC Music. Rachel was awarded Artist of the Year (Music) by the Hong Kong Arts Development Council in 2019. Rachel is also an amateur photographer; she documents her travels with her analog camera, particularly enjoying the ability to capture the character and feeling of each moment.